Worcester Braveheart Ben Smith (38) does Rock Paper Scissors with Norwich Sea Unicorns catcher Zac Zyons to determine if his inside the park homerun would end in an out or safe call. Paper beats Rock every time.

If you’ve heard of the Savannah Bananas, then you know that a revolution is coming in baseball. The Harlem Globetrotters meets Barnum & Bailey concept debuted this week in New England, when the Worcester Bravehearts of the Futures Collegiate Baseball League, held their first-ever “You-Choose-The-Rules” games of 2022.

Every inning featured a fan-generated rule for a TikTok age that went way beyond the baseball norm. Pitching and hitting with your non-dominant hand?! Kickball for an inning?! Rock-Paper-Scissors to determine if your out or safe?! It was one of the best baseball games I have ever witnessed.

Held on the team’s annual Baseball in Education Days, the Bravehearts brought students from across Massachusetts for an educational field trip at the ballpark. What an education it was in non-traditional baseball when the sport needs to inspire new, young fans.

Tuesday’s regular season game in front of a sellout crowd of 3,246, the first of two “You-Choose-The-Rules” contests of the week, featured seven different kid-designed rule changes, including a fourth inning that featured a young fan in the outfield as a fourth outfielder, and batters getting pied in the face after striking out in the fifth. The Bravehearts fell 9-8 to the Nashua Silver Knights at Fitton Field in the first-ever fan-generated rule game in the history of the FCBL.

Wednesday’s exhibition game in front of 3,385 fans, mostly elementary age children, was an opportunity to go even crazier. Ending in a 9-8 victory for the Bravehearts over the Norwich Sea Unicorns, the game included an inside the park homerun that wasn’t complete without the hitter winning a Rock-Paper-Scissors battle with the catcher. The game – with a hard and fast two hour time limit – started with pitchers throwing with their non-dominant hands to batters hitting in the opposite stance. Pitches floated to the plate, batters took hacking swings, and two runners took advantage from each team, stealing home while the errant throws went all around the plate. I’ve only seen a steal of home two times in the major leagues, but here it was twice in the first inning of the game.

One teacher I was sitting next to had never heard of the Savannah Bananas and said it was the best baseball game she had ever witnessed. Most of her kids had never been to a game before. Boy will they be surprised the next time they go.

Jesse Cole’s Savannah Bananas are renowned for playing by their own rules under the moniker Banana Ball, including infield karaoke, batters competing on stilts, batters introducing themselves when coming up to bat, and a two-hour time limit, no more of not knowing how long you will be at the park.

The “Bananas” nickname came from a fan contest with just one person submitting it, but ownership immediately saw the possibilities. The mascot is called “Split” and “Princess Potassia” sings in a bright yellow ballgown. A dance squad comprised of grandmothers is known as the “Banana Nanas.”

The team is on a roll, featured on Sunday Morning with Jane Pauley, and making headlines across the sports universe including a feature in the LA Times. Jesse Cole emcees the Bananas games at historic Grayson Stadium in Savannah, GA, wearing a bright yellow tuxedo.

“The Savannah Bananas are a baseball team with one goal, to make baseball fun,” said Jesse Cole on Sunday Morning. How do you make baseball fun? “We celebrate everything. We’re in a TikTok world, we can get entertainment at our fingertips, and I think baseball needs that.”

The 2022 Season is officially sold out. It’s better to view their antics then read them. Follow the team on social media @thesavbananas on Instagram to view players doing flips crossing homeplate, dancing umpires, dancing players, and some amazing traditional baseball plays thrown in – occasionally. They have to be fun to make their feed. The Savannah Bananas have the largest social media following of any baseball team, including the MLB.

The team played sold-out exhibitions during their 7 cities, 14 Banana Ball games, World Tour in 2022 that took them to Daytona Beach (FL), West Palm Beach (FL), Montgomery (AL), Birmingham (AL), Kansas City (KS), Columbus (GA) and at home in Savannah. The tour will expand in 2023, but the schedule has not yet been released. And they do actually play real baseball with their antics. The team had one current and seven former players selected in this year’s MLB draft.

The two teams already have players in common. Former Bravehearts pitcher Jakob Barker signed with the Bananas in 2021 and Dakota McFadden from the 2018 team was the cleanup hitter throughout the 2022 Bananas “World Tour” that took them to seven cities around the US for exhibitions.

The Bravehearts management, led by General Manager Dave Peterson, visited Grayson Stadium to meet with Jesse Cole and his management staff in November 2021. Out of that meeting, both organizations found that they had the same core value – To always put the fans first – and created Twenty-Twenty-You, a program dedicated to making the game as interactive for the fans as possible.

The “You-Choose” campaign was announced with the team offering games where the fans could choose the rules, music, promotions, jerseys and who knows what might come next. If Wednesday’s game was indicative of the fan and player excitement level, baseball can be fun.

Bravehearts pitcher TJ Wachter, a sophomore from Fordham University, was carried by his teammates to the mound in the seventh inning for his relief pitching appearance. Several batters later, he was carried off the field by his manager, Alex Dion, when he was yanked. It was his birthday and he had a great day, serenaded by the entire stadium with a boisterous singing of “Happy Birthday” and then his teammates told him at the last second that they were going to body surf him to the mound.

“It’s something I will never forget,” TJ said. “I’d seen them (Savannah Bananas) on TikTok and on social media, and thought that wow, that would be a fun environment to play in and to be able to be a part of something similar is very, very cool.”

“We play 64 games which are all serious business,” Kos said. “We have an inning where the bullpens were in play. That’s awesome.” 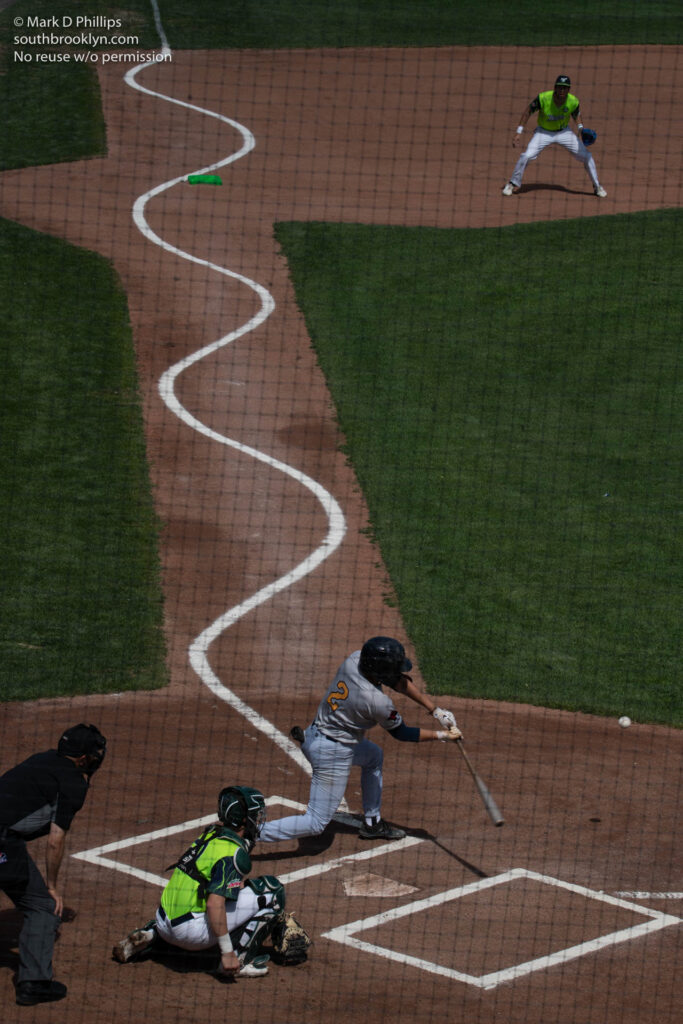