4 weeks ago
Jupiter and Saturn rule the sky
2 months ago
David Dinkins Tribute
2 months ago
Oil, Tar and more comes to the Surface
4 months ago
Art on the Stoop, Studio 54 launch Brooklyn Museum reopening
4 months ago
Photoville brings a bit of normalcy to Brooklyn

Down Under the Manhattan Bridge Overpass – DUMBO for short – is the new art mecca of New York City.

The area’s fast-paced growth is a double-edged sword. New residents and businesses appear as quickly as renovations and new construction are completed, overwhelming the infrastructure. The architecture of DUMBO was created for an industrial economy. In the 19th century, Brooklyn was the fourth largest manufacturing center in the country. The waterfront of DUMBO was home to some of the largest companies of the time, including Arbuckle Brothers, refiner and packager of sugar and coffee; Robert Gair, manufacturer of paper boxes; the Hanan & Son shoe company; the Kirkman & Son soap company; the John W. Masury & Son paint works; the Jones Brothers/Grand Union grocery business; the E. W. Bliss machine works; and the Brillo steel wool firm.

The area was originally all residential and farms. The Canarsee Tribe sold the land to a Dutch immigrant, Joris Jansen Rapalje (also spelled Rapalye) in 1637. The Rapaljes were loyalists during the Revolutionary War and lost their holdings. The next owners, Comfort and Joshua Sands, were from an original family that landed at Plymouth, Massachusetts, in 1658, which accounts for Plymouth Street in DUMBO. Sands purchased 160 acres of land for $12,000 from New York State, who confiscated the property from the Rapalje family. Sands named the area Olympia.

The 19th century saw the area change rapidly. Landfill was added in the first years of the new century, creating new land above Water Street. The area became desirable when nearby Fulton Ferry gained steam-operated, reliable ferry service to Manhattan in 1814. In the 1830s, with two ferry lines (on Main Street and nearby Fulton Street) and the growth of the waterfront docks, the influx of businesses boomed.

By the end of the century, Brooklyn was the fourth largest manufacturing center in the country. The waterfront of DUMBO was home to some of the largest companies of the time, including Arbuckle Brothers, refiner and packager of sugar and coffee; Robert Gair, manufacturer of paper boxes; the Hanan & Son shoe company; the Kirkman & Son soap company; the John W. Masury & Son paint works; the Jones Brothers/Grand Union grocery business; the E. W. Bliss machine works; and the Brillo steel wool firm.

The opening of the Brooklyn Bridge in 1883 and Manhattan Bridge in 1909 only improved the neighborhood’s business status. Its easy access to both bridges made deliveries convenient, and created stunning visuals within the streets beneath the spans.

The major industries began to leave DUMBO by the 1920s – in 1927, Gair production moved to Piermont, New York; in 1933, the Bliss Company moved its manufacturing to Toledo, Ohio; the Hanan & Son shoe company went bankrupt during the Great Depression in 1935; Kirkman soap closed in the early 1940s; and in 1945 John W. Masury & Son moved its paint manufacturing to Baltimore. Many small businesses rented space in DUMBO’s factories and others, such as the Arbuckle sugar refinery, were converted into warehouses (the refinery became a warehouse in 1945).

Artists discovered the area soon after as cheap rents and huge spaces became available in many of the former warehouses. By the late 70s, the artists had created the new neighborhood of DUMBO.

David Walentas and his Two Trees Management Company purchased the Gair complex and several other DUMBO factories from Harry Helmsley in 1981. Walentas became DUMBO’s largest developer and a strong supporter of the arts. Along with his wife, Jane, the two presented Jane’s Carousel to Brooklyn Bridge Park. Built in 1922 by the Philadelphia Toboggan Company, the carousel was purchased in 1984 and painstakingly restored to its original condition by Jane Walentas.  The carousel is located in the Empire Fulton Ferry section of Brooklyn Bridge Park, housed in an all-glass pavilion.

The days of cheap artist lofts and workspaces are fading fast, with multi-million dollar condos and coops sprouting all over the gritty cobblestoned landscape. Brooklyn’s fascination with the arts and design is no longer a local phenomenon. Brooklyn artists and designers are gaining a worldwide audience. The local developers are aware of DUMBO’s standing in the arts and have made efforts to keep the art community in DUMBO by offering gallery and performance spaces at reduced rents, and using art installations in public lobbies.

Places of Interest in DUMBO include:

St. Ann’s Warehouse moved to DUMBO in 2001 after spending its first 21 years at the Church of St. Ann and the Holy Trinity on Montague Street in Brooklyn Heights. The original location in DUMBO was a converted spice-milling warehouse on Water Street that hosted David Bowie, Laurie Anderson, The Wooster Group, Al Pacino and more in their versatile space. The new season, which opens in October, includes a World Premiere of “Lou Reed’s Berlin,” William Shakespeare’s “Hamlet” by The Wooster Group, and the Live American Debut of Stuart A. Staples.

St. Ann’s Warehouse moved to the historic Tobacco Warehouse in Brooklyn Bridge Park in 2015, joining the renovated Tobacco Warehouse as a destination on the waterfront. Empire Stores was owned by coffee industry pioneer Arbuckle Bros. and used as a storage warehouse before it was sold and left abandoned for decades. Empire Stores has been restored to a stunning, modern-day hotbed of culture and commerce. 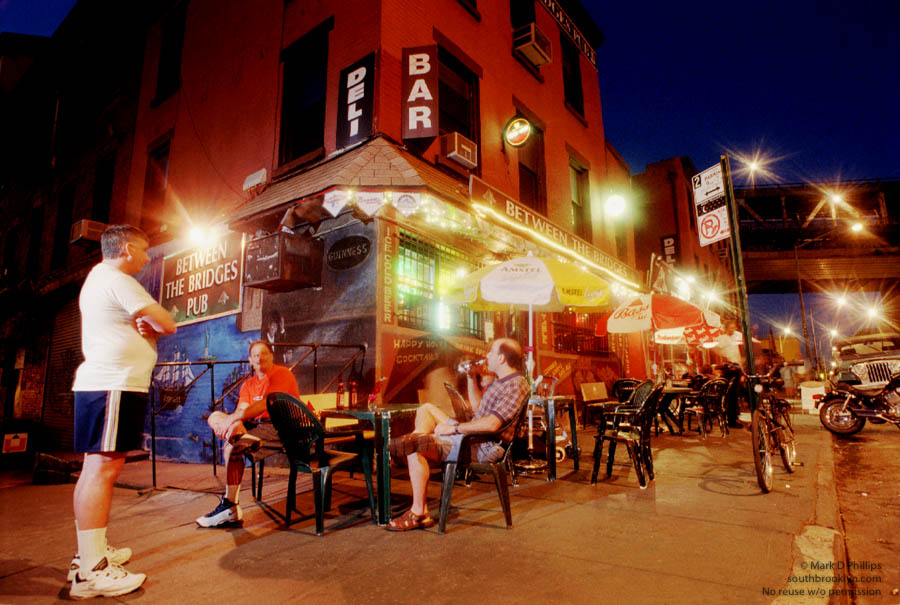 Keith Harrigan (left), one of the owners of Between the Bridges Pub in DUMBO, talks with Tommy Politano (center) and Steve Amoroso (right), partners in Prestone Press fine lithographers which relocated to DUMBO from Manhattan. ©Mark D Phillips 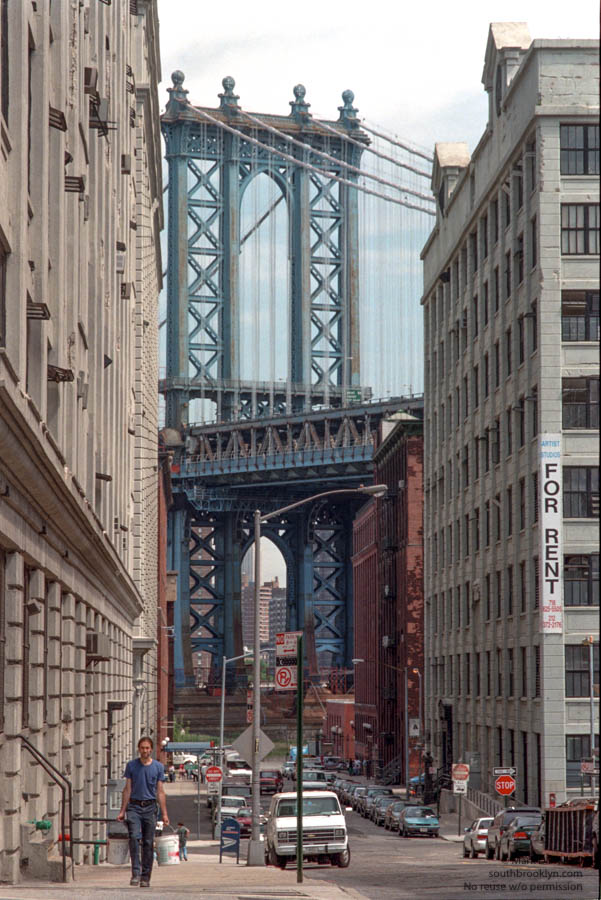 INSTAGRAM TO COME: Washington Street, in DUMBO in the mid 90s was a desolate place. Little did we know it would become the most famous spot on Instagram in the 2010s. ©Mark D Phillips

PRE-GENTRIFICATION: Under the Manhattan Bridge overpass in Brooklyn, DUMBO is the new SOHO of New York City. With warehouse buildings that are being converted to loft apartments, the area is undergoing rapid transformations. ©Mark D Phillips 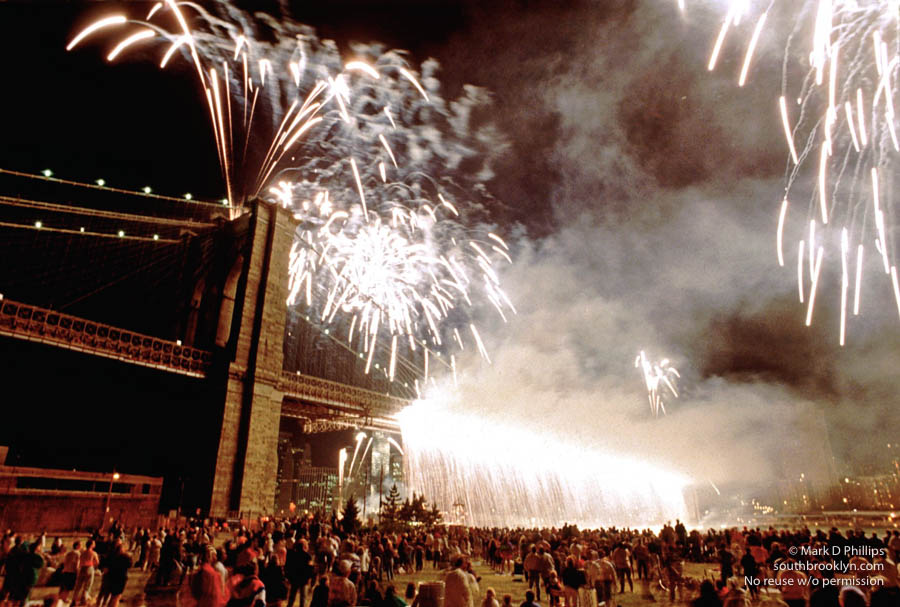 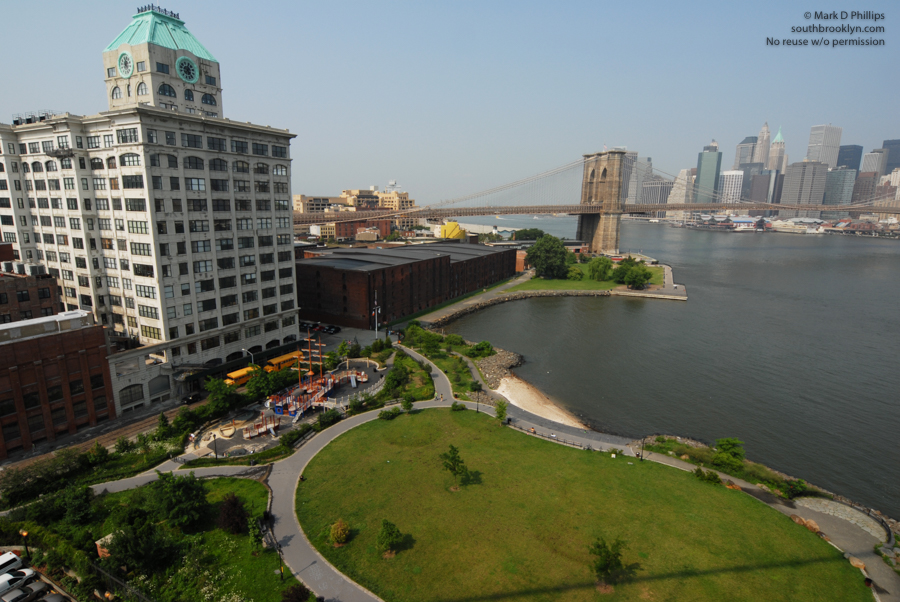 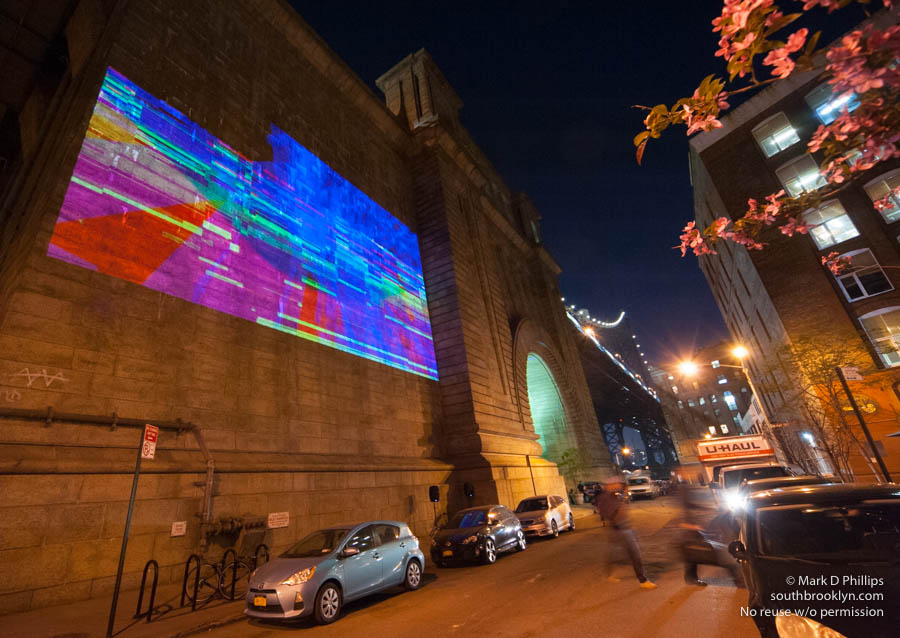 LIGHT YEAR: In honor of the United Nations’ declaration of 2015 as The Year of Light and Light Art, the Manhattan Bridgein DUMBO is coming alive with “Light Year.” Beginning this May, this year-long series of projected video art will be presented on the First Thursday of every month. “Submerged!” provides liquid visions of a multi-layered, every-shifting psychological seascape. Seven video + sound pieces based upon three short stories by co-curator Leo Kuelbs make up the 30 minute looping program presented at the edge of the East River, on the Northern Anchorage of the Manhattan Bridge. A group of visual and sonic-based artists from a variety of countries including Germany, Israel, Italy, USA, Portugal, Brazil and Hungary make “Submerged!” a truly international effort. When represented from multiple cultural angles, a mysterious whole reveals itself, always changing, just beneath the viewable surface. ©Mark D Phillips 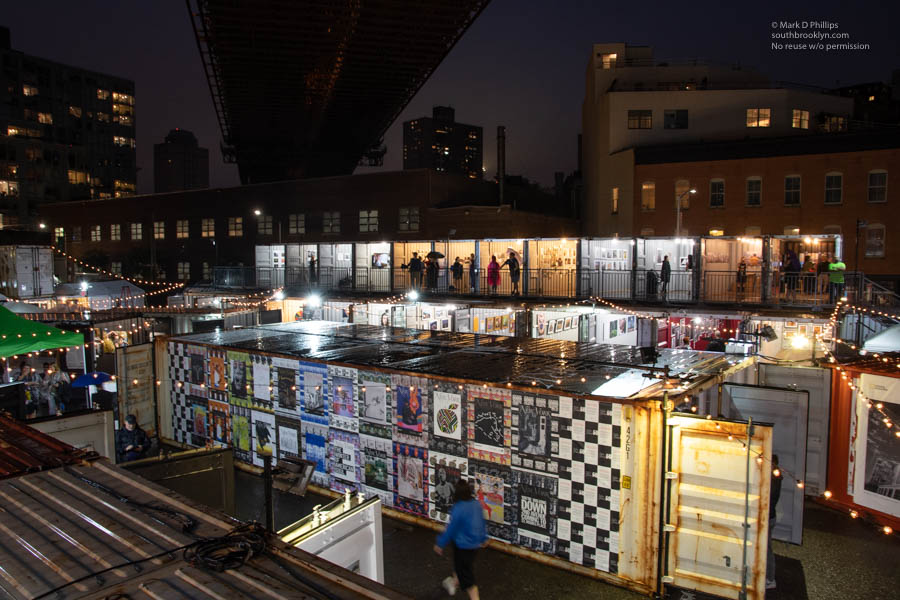