1 month ago
Maccabiah returns to Israel
3 months ago
Skywalk at Niagara, 20th Anniversary
4 months ago
James Nachtwey Memoria
2 years ago
Oil, Tar and more comes to the Surface
2 years ago
Photoville brings a bit of normalcy to Brooklyn

Brooklyn Heights boasts the greatest views of lower Manhattan and brownstone mansions that rival anything on Fifth Avenue.

Considered to be the first suburb in America, the Brooklyn Heights of today is much more than a suburb. It has become one of the most desirable neighborhoods for Manhattanites ready to raise a family. It is a Manhattan neighborhood, located on the better side of the river.

With a five minute commute to the Stock Exchange via subway, many of today’s residents are Wall Street workers looking for more space and neighborhoods with old New York character, something in abundance in the Heights.

The Brooklyn Heights Promenade will take your breath away. The unique park built atop the double decker Brooklyn-Queens Expressway draws tourist worldwide for its spectacular views of the East River bridges and the skyscrapers of Manhattan. As you walk the length, small memorials for the World Trade Center still adorn its space. Many residents watched the tragedy unfold less than two miles away.

As usual, Brooklyn rebounded. The tragedy at the World Trade Center brought many new residents. The housing boom brought new life to many brownstones as renovations skyrocketed. New construction has appeared on nearly every empty lot.

Brooklyn Bridge Park is reshaping the waterfront beneath the BQE and bringing life back to a dilapidated area. The 85-acre park gained unanimous approval from the Empire State Development Corporation in January, 2006. Over the last fourteen years, the change to the waterfront has been spectacular.

As the park takes shape, the neighborhoods are booming. With new sports fields open on Pier 5 and the sand Volleyball Courts on Pier 6, the southern end of the park closest to Atlantic Avenue, is already a well-used destination.  Joralemon Street provides a direct line access from the heart of the Heights to the sports fields, and the cobblestone street is a classy way to bring first-time visitors in an impressive “Brooklyn” tour.Brooklyn Bridge Park will only get better. The addition of the Picnic Peninsula with Hibachi-style grill tops and picnic tables made of salvaged wood at Pier 5, is totally unexpected. Making the location a full-day destination requires early arrival and planning as the tables cannot be reserved and are on a first-come basis. Also located on Pier 5 are the only bait preparation tables and fish cleaning stations in the park. For both tourists and residents, the park is becoming a location for free events and free outdoor activities. Happenings on SBN is your location for planning visits to the park. From the annual “Syfy Movies With a View” summer movie series, to “Books Beneath the Bridge” and “Sunset Pilates,” there are events for nearly every interest.

For recreation, the park is becoming unparalleled, and not just for field sports. As construction begins on Pier 2, the 5 acre area will feature active recreation courts for basketball, handball, and bocce, as well as a full size in-line skating rink. It is the location now for the Eco-Dock, where all public kayak programs take place. In the future, a pebble beach will be constructed by Pier 4, providing additional boat access areas. A wave attenuation system between Pier 1 and Pier 4 will create a protected boating environment, allowing both novice and experienced boaters to paddle the East River.

Today’s Brooklyn Heights is also a monument to the history of New York and the United States. Europeans first appeared in 1645, forming the settlement of “Breuckelen” near the site of today’s Borough Hall. Breuckelen, meaning marsh land, is thought to come from the areas resemblance to Breuckelen, Holland, where the settlers originated. The bluffs of Brooklyn Heights gained fame as many of Manhattan’s early merchants built mansions to gain the first views of “the city.”

It was from one of these mansions in 1776, that George Washington made his fateful decision to retreat from Brooklyn. Using the Cornell Mansion as his headquarters, Washington watched the Battle of Brooklyn unfold into a horrific defeat for his army. As his men battled the British in Battle Pass (now located within Prospect Park in Park Slope), he is quoted as saying: “Good God, what brave men must I lose this day!”

Under the cover of darkness on August 29th, Washington’s army crossed the East River from Fulton Ferry to Manhattan, leaving Brooklyn to the British. The British Empire ended its occupation of New York on November 25, 1783. November 25 was celebrated as a holiday in New York for more than a century as Evacuation Day.

The 1800’s saw unparralled growth in Brooklyn. As New York and Brooklyn blossomed into the heart of the new United States, Brooklyn Heights became the playground for many of New York’s wealthiest investors. In 1807, Robert Fulton captained his steamboat, The Clermont, from the Brooklyn Ferry on its maiden voyage up the Hudson River. In 1814, Fulton gained a franchise to operate ferry service via steamboat from Brooklyn to Manhattan. As the population boomed, Brooklyn became a city in 1833.

Early on, Brooklyn Heights became an enclave to literary aspirations. In 1855, Walt Whitman printed the first ten pages of his well-known book of poetry, Leaves of Grass, on a press borrowed from some friends. Following in his footprints, Truman Capote wrote his masterpieces, “In Cold Blood” and “Breakfast at Tiffany’s,” in a basement apartment on Willow Street. The Brooklyn Book Festival is the largest free literary event in New York City, held each September at Brooklyn Borough Hall and in, presenting an array of national and international literary stars and emerging authors.

Montague Street, the heart of Brooklyn Heights, is four blocks long, ending at The Promenade. Named in honor of Lady Mary Wortley Montague, born in 1689 to Evelyn and Mary Pierrepont, she gained notoriety for bringing the practice of inoculations to prevent smallpox to England after witnessing its use in Turkey while her husband served as ambassador for King George I. The past decade has seen a radical change on Montague Street with the influx of national shopping chains replacing the locally owned businesses. Another major change is underway with the Hotel Bossert, once known as “the Waldorf-Astoria of Brooklyn,” reverting back to a hotel after nearly 30 years of ownership by the Jehovah’s Witnesses. Sold in late 2012 for $81 Million dollars to Clipper Equity and the Chetrit Group, the 14-story building, which hosted the only World Championship Party for the Brooklyn Dodgers, will once again become a boutique hotel with around 300 rooms.

For the tourist or history buff, Brooklyn Heights has an abundance of “not to be missed” landmarks:

• St. Ann and the Holy Trinity Church on Montague and Clinton Streets, was designed by Minard Lafever and constructed between 1844 and 1847. Containing 7,000 square feet of stained glass windows designed in the 1840s by William and John Bolton, they are renowned as the FIRST American made stained glass.

• Our Lady of Lebanon Church on Henry and Remsen Streets, features placques on its massive Bronze doors from the Normandie, and inside the church, a bronze railing, a cloisonne enamel bas-relief of a Norman knight, and a bronze statue entitled “La Paix” (Peace).

• The Brooklyn Historical Society on Pierrepont and Clinton Streets, is a four-story Queen Anne style building that was completed in 1881 and designed by architect George B. Post. BHS provides a look into Brooklyn’s past with changing exhibits and walking tours of the neighborhood.

• Plymouth Church of the Pilgrims on Orange and Hicks Streets, first gathered in 1847, led by Henry Ward Beecher, the famed clergyman and antislavery advocate. From its beginnings, the Church served as a vital philosophical and geographical link in the Underground Railroad. 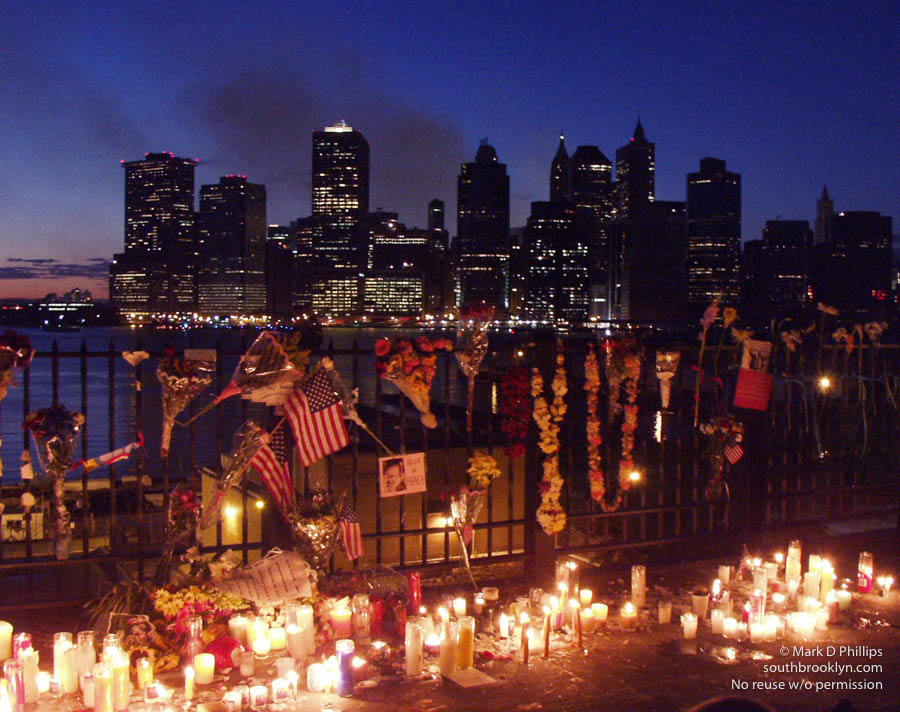 Brooklyn Heights Promenade is covered with candles the nights after the 9/11 attacks as smoke rises from the World Trade Center site in lower Manhattan. ©Mark D Phillips

The Monsignor of Our Lady of Lebanon in Brooklyn Heights heard that the Normandie's salvaged treasures were to be auctioned, and with the blessings of his parish, attended the event and purchased the bronze doors and ten placques. The doors, which once were the entryway to the majestic banquet room of the luxury liner, now grace the entry to the church in Brooklyn Heights. The ten placques were added to the doors. The cost of the doors was $1,025 and all ten placques for $975. ©Mark D Phillips 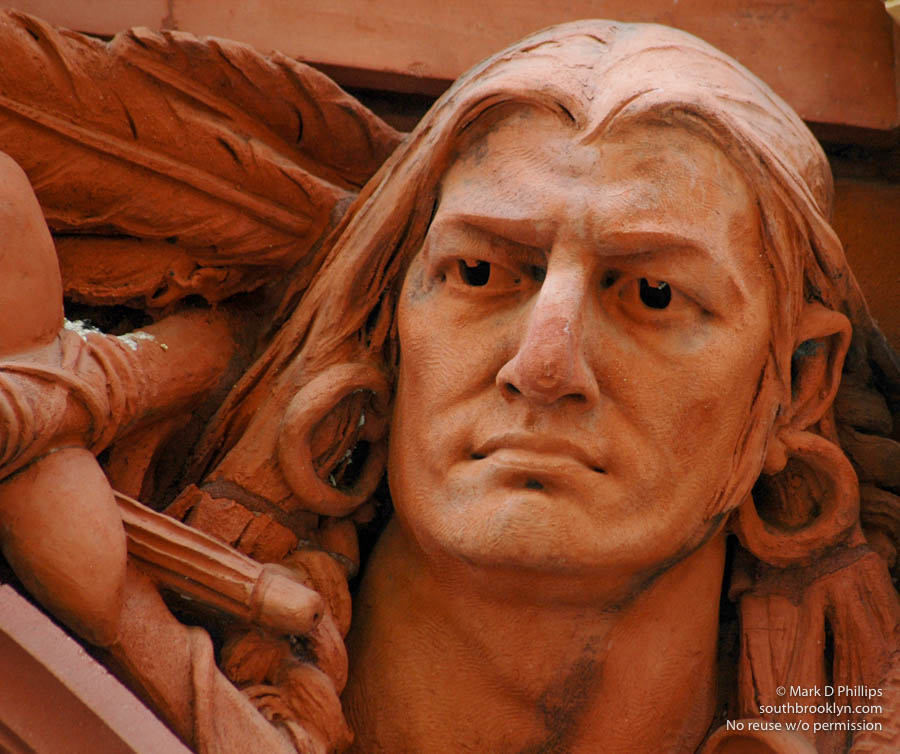 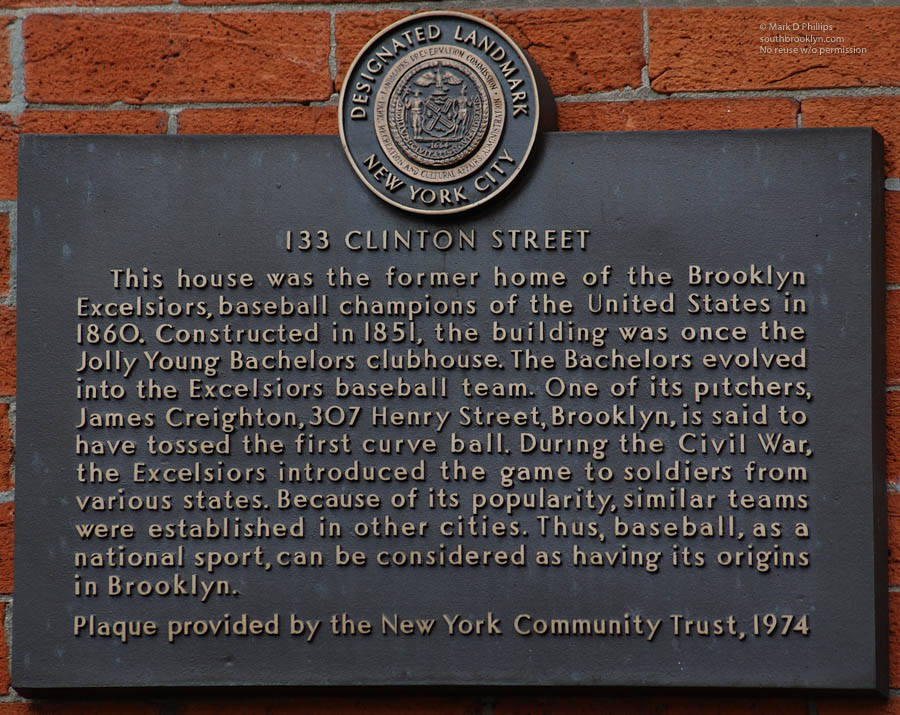 Landmark sign for the Brooklyn Excelsiors at 133 Clinton Street in Brooklyn Heights, one of the earliest baseball teams. During the Civil War, the Excelsiors introduced the game to soldiers from various states. Thus, baseball, as a national sport, can be considered as having its origins in Brooklyn. ©Mark D Phillips 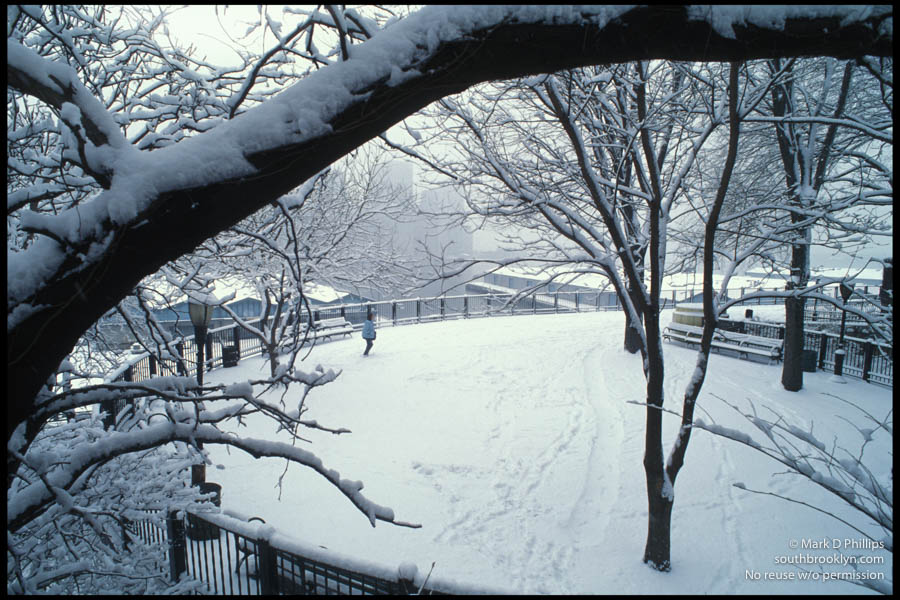 SNOW ON THE PROMENADE

A loan pedestrian walks in a winter wonderland on the Brooklyn Heights Promenade near the Brooklyn Bridge. ©Mark D Phillips 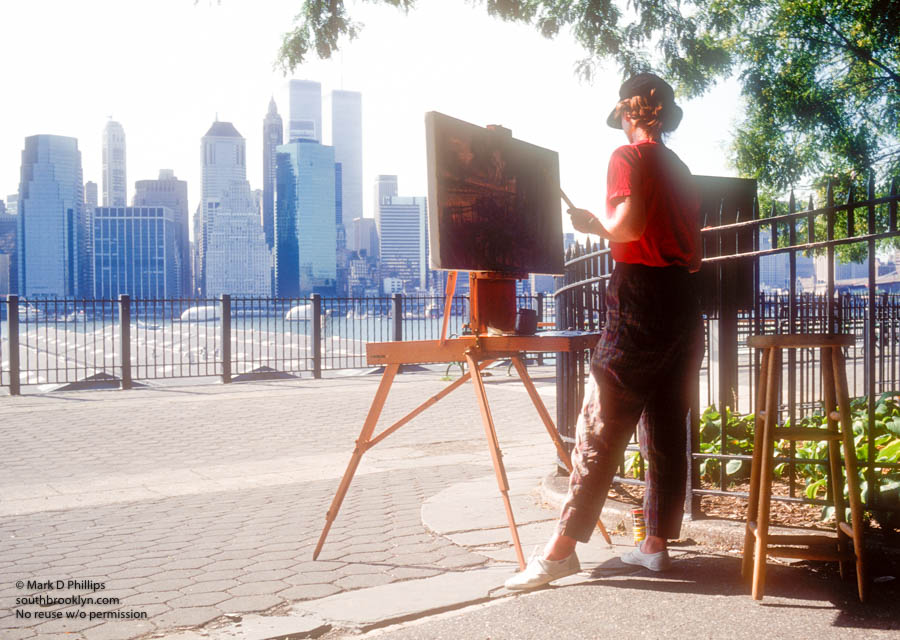 A painter on the Brooklyn Heights Promenade recreates a World Trade Center view on her canvas. ©Mark D Phillips 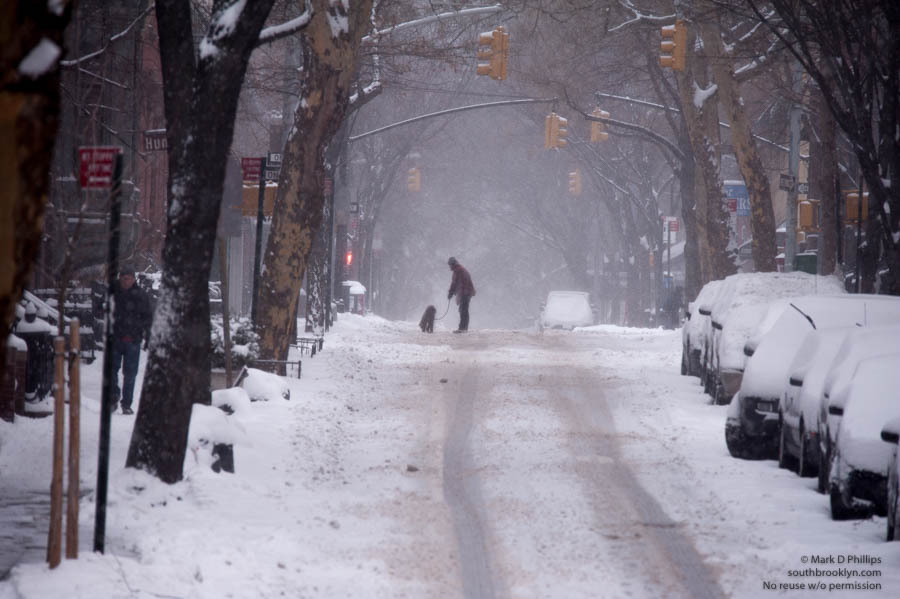 It really wasn't a blizzard on January 27, 2015, in New York City but any heavy snow turned Henry Street in Brooklyn Heights into a dog run. ©Mark D Phillips