4 weeks ago
James Nachtwey Memoria
1 month ago
Brooklyn Utopias: Along the Canal
3 months ago
Skywalk at Niagara, 20th Anniversary
5 months ago
Season 8 of the ABB FIA Formula E World Championship returns to Red Hook
6 months ago
Warhol comes to Brooklyn 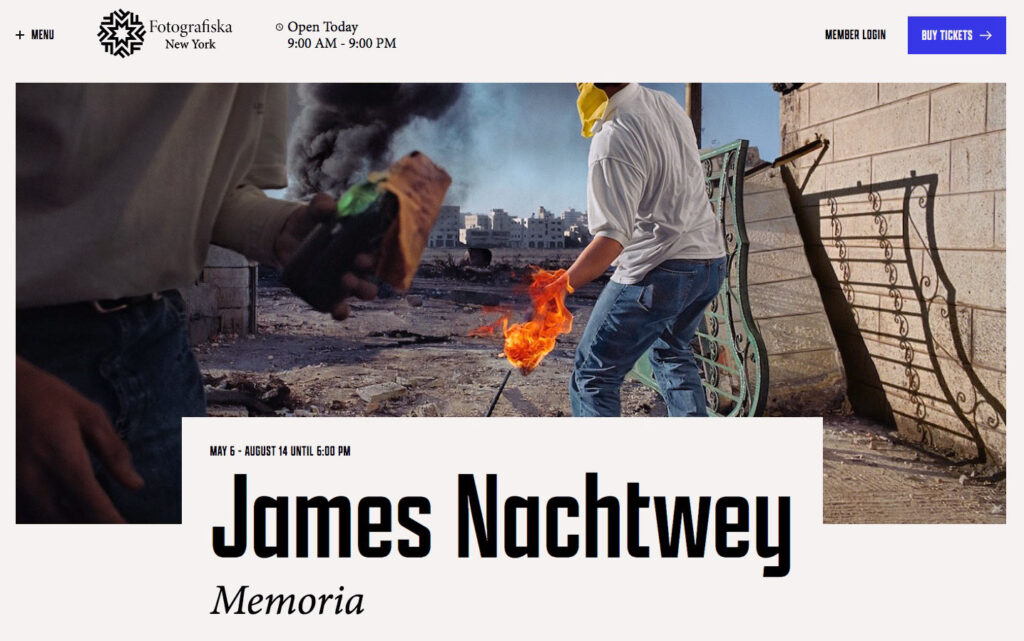 James Nachtwey brings images to us that not many people in the world can. His view of the world around him is bittersweet and jarring.

I first met James in Washington, DC, at the 1992 Pictures of the Year awards. He was Magazine Photographer of the Year and I was a Sports Photography winner, as far from war coverage as I could be. We next crossed paths in South Africa during Nelson Mandela’s campaign and inauguration in 1994. His work has given us a look into the human heartbreak of war and famine.

Fotografiska New York is presenting a major retrospective, Memoria, which includes 77 photographs arranged in narrative sequences including many of Nachtwey’s most prominent bodies of work. Each photograph in this exhibition is a fragment of memory, captured within the continuum of the history Nachtwey experienced. Each image was intended to reach a mass audience at the time the events were taking place, as a way of raising public consciousness; one element among many in the process of change.

Now, as that same continuum moves relentlessly forward, and the events themselves recede in time, the artist’s hope is that these pictures will stand as a remembrance of the people in them, of the conditions they endured and of how those conditions came to be.

As we share these memories, we bear witness together. Let us not forget. — James Nachtwey

James Nachtwey (born March 14, 1948) grew up in Massachusetts and graduated from Dartmouth College, where he studied Art History and Political Science (1966-70). Nachtwey was influenced to become a photographer by images of the Vietnam War and the American Civil Rights Movement. He began his career as a newspaper photographer in 1976 and became a freelance in 1980. Since then, he has worked worldwide, committed to documenting wars and critical social issues.

Nachtwey has been a contract photographer with TIME Magazine since 1984. He was a member of Magnum between 1986 and 2000 and was one of the founders of the photo agency VII, where he was a member from 2001 to 2008, when he became independent. Nachtwey’s images focus on the impact of injustice and violence, yet they evoke a sense of compassion and sympathy. Within large-scale historical events of global impact, he documents intimate moments of humanity. His photographs can appear to have a formal completeness, but they are spontaneous, intuitive and often composed in a fraction of a second.

Fotografiska New York is the NYC location of the renowned Stockholm-based destination for the world’s best photography. Founded in 2010, Fotografiska was built on the foundation of photography as a haven for inclusivity and free expression.

The building is a registered landmark built in 1894 and originally named “The Church Mission House,” renovated to be a new experience of world-class art, cultural events, retail, and epicurean dining, in an awe-inspiring space.