Mikaela Shiffrin added the fifth and sixth reindeers to her herd as she claimed her 75th and 76th World Cup wins in Levi, Finland, breaking Lindsey Vonn’s record for the most podiums in a single discipline by a female skier. And these are just the first races of the season.

As for her new reindeer names, – YES, Levi gives the winners REAL, live reindeers – she posted to Facebook today:

“Our little buddy from last night will be named “Sunny” (short for Sunshine) in honor of Ava Jemison’s spectacular first World Cup race and also because there should always be a little sunshine in Levi (sry Isabella – Bella Wright! Trust me you were high on the list!)”

“And for tonight, the name is “Lorax,” in honor of my Dad and in extension my whole family- who have taught me, supported and encouraged me, and have been my lifeline for these last years since he passed.”

She is now just six World Cup wins shy of Vonn’s overall record of 82 wins for a female skier and 11 behind the all-time leader, Sweden’s Ingemar Stenmark.

She returns to Vermont for the Heroic Killington Cup on  Thanksgiving weekend 2022.

No one thought Killington could pull this off, especially for six straight years. 2016 was the first World Cup to be hosted in the eastern United States since Waterville Valley, NH, in 1991 and has since become a favorite event of local fans and World Cup stars alike. The crowds were phenomenal with estimates over 40,000 per year — until COVID and weather decimated years four and five. Will this year’s appearance shatter records?

The big draw this year is Mikaela’s path to immortality. She could gain two of the victories she needs on her home soil. I wasn’t going to go but I’m considering a day trip to watch her slalom runs once more. It is like watching ballet mixed with bobsled. Her speed and grace is overwhelming. If she makes a mistake, she immediately recovers and goes even faster. And she is a joy to be around. Her smile and her honesty about the extreme pressures she faces in competition has inspired an entire generation of young skiers. I’m so happy my daughter skied and raced at the same time as Mikaela.

Over the last six years, the American team has blossomed into a force to be reckoned with. Paula Moltzan came into our lives during my daughter’s tri-state ski races in the Northeast. We will never forget a weekend when Paula and her now-husband, Ryan Mooney, ran the giant course at Berkshire East as forerunners and said how challenging it was. We all knew she was going to make it. We watched Nina O’Brien at the US Nationals in Alpine Skiing at Waterville Valley, New Hampshire, on March 23, 2019. In the two-weekend competition, she swept Alpine combined, Super-G, Parallel Slalom, and Slalom National Championships at Sugarloaf and Waterville Valley.

The Up and Comers

In Levi, Mikaela officially joined the all-time greats of ski racing. At the same time, her teammate, World Cup rookie Ava Sunshine, finished 21st in her first WC race, raising the LA-native’s  profile on the international stage. She even got a tweet of congratulations from teammate Mikaela:

So what to expect coming into Killington’s last dance on this-six year string of world-class World Cup events?

The weekend schedule is back to its pre-pandemic level beginning Nov. 25, with autograph sessions and the super fun bib draw. The top 15 skiers randomly draw their numbers to decide the order in which they will race in the first run, and entertain the crowd while doing it.

We have seen the world’s best take on the local slopes during The Killington Cup, and it has been exhilarating. In 2016, Mikaela won her tenth consecutive slalom World Cup victory, her 21st slalom World Cup, and 22nd in all disciplines. On the podium with her that day were Veronika Velez Zuzulova of Slovakia in 2nd, and Wendy Holdener of Switzerland in third. Holdener is still a force to be reckoned with at age 29 following second and fifth place finishes in Levi.

Mikaela will defend her royalty at Killington, hoping to keep her streak alive. Tough competition will come from Petra Vlhova of Slovakia, the 2022 slalom crystal globe winner, who finished  third in both of Levi’s slaloms.

And let’s not forget that there is a second discipline at the Killington Cup with Saturday’s GS competition. Tessa Worley of France took the inaugural GS title in 2016.

Mikaela has won all five years in slalom, finally reaching the podium in GS with a second place finish in 2017. It was an epic competition in 2017, pitting Manuela Moelgg of Italy (the oldest competitor on the tour at age 34) and Viktoria Rebensburg, the 2010 Olympic gold medalist in giant slalom, against the local favorite. Rebensburg took first by 0.41, her second win in a row.

In 2018, Federica Brignone of Italy, coming back from a knee injury just three months before, overcame a mistake on the GS course and powered her way to first place. Her infectious spirit at the Bib draw and then the after race press conferences, made her a crowd favorite.

After her win, Brignone joined the crowd of supporters, signing as many autographs as she could.

“I remember when I was a kid and going around to some races and wanted to get the autograph from the (winner),” Brignone said. “So I tried to stop to each little guy or little girl that wanted my autograph and I hope I did it for everyone.”

Killington offers a unique closeness to the athletes that we hope will be back. The schedule features parties and music, but the weather shows a chance of rain and above-freezing temperatures. 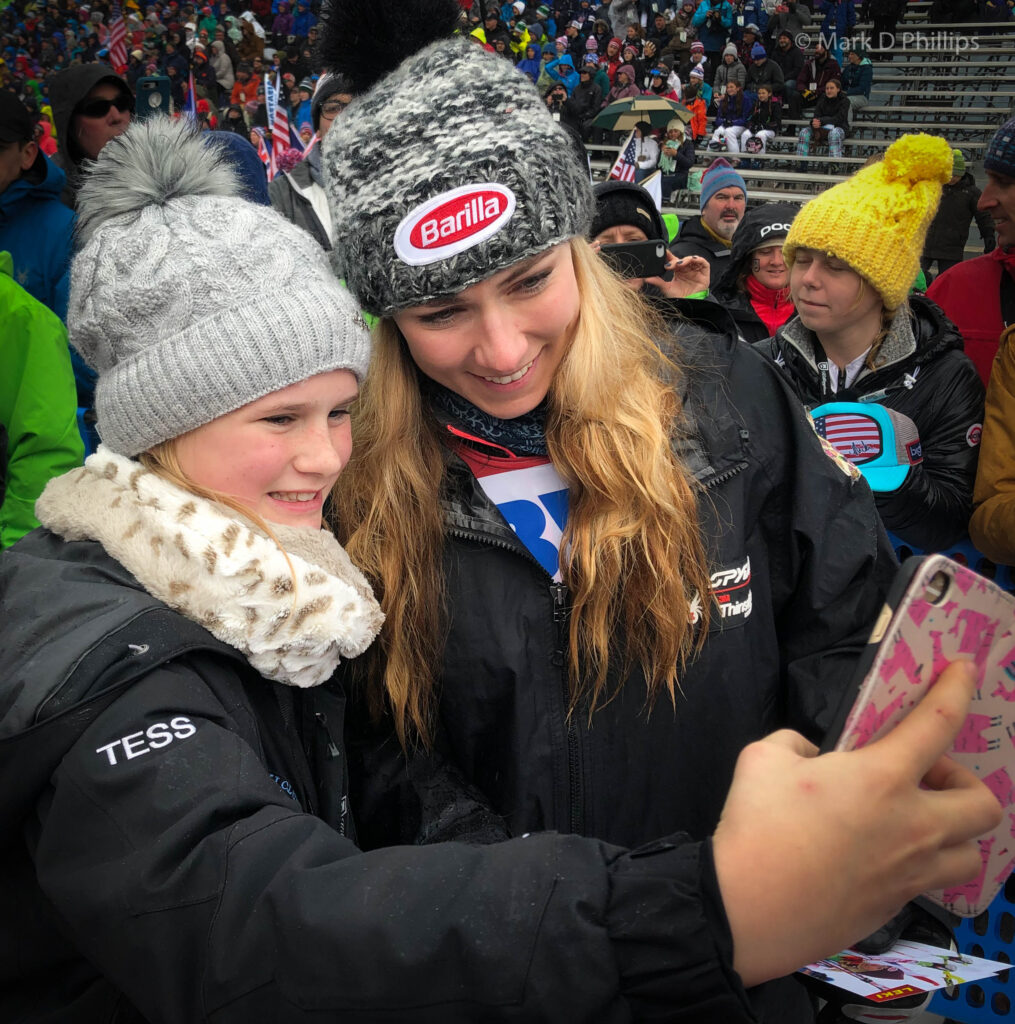 Mikaela SelfieMikaela Shiffrin stops for a selfie with a fan after her first slalom run in 2016. ©Mark D Phillips

On the EdgePetra Vlhova of Slovakia cuts by a slalom gate to a 2nd place finish at The Killington Cup in 2017. ©Mark D Phillips

From 15th to 3rdManuela Moelgg of Italy, the oldest skier in the competition, made the incredible leap from her 15th place start position to a third place podium appearance in the 2017 Giant Slalom. ©Mark D Phillips 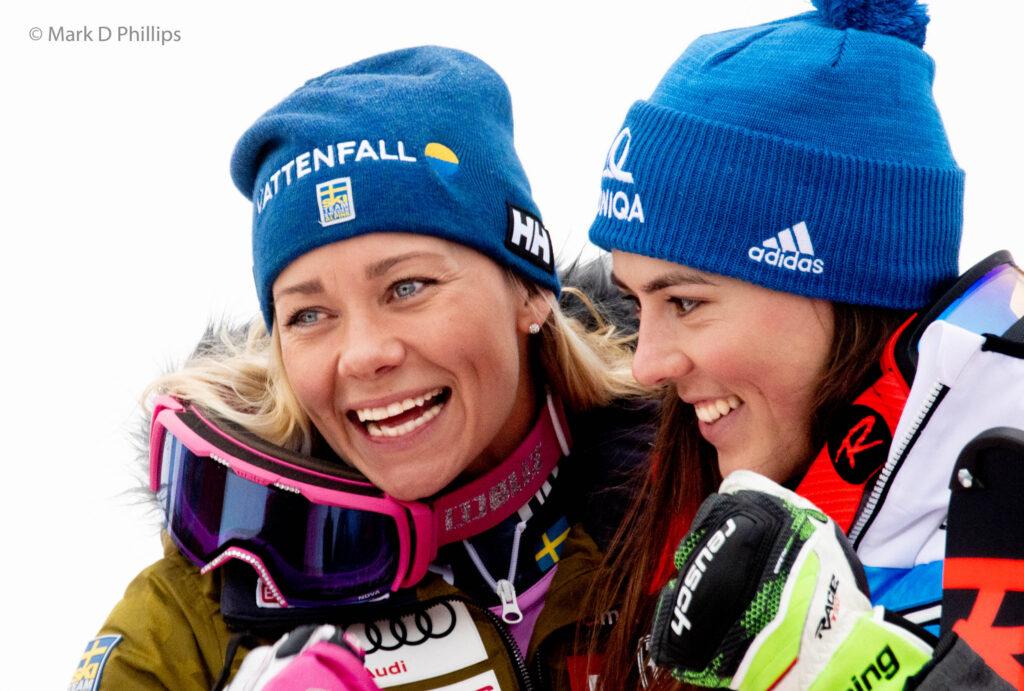 Final World Cup CelebrationFrida Hansdotter of Sweden, in her final season, celebrates on the podium with Petra Vlhova of Slovenia at the 2018 Killington Cup. ©Mark D Phillips

Bouncy SlalomNina Haver-Løseth of Switzerland bounces off the snow on the way to a 4th place finish in the 2016 Killington Cup slalom. ©Mark D Phillips

One Ski DanceMichaela Kirchgasser of Austria manages to come across the finish on one ski to finish 9th in slalom in 2016. ©Mark D Phillips

Shouting for JoyResi Stiegler of the US shouts after finishing 17th in slalom at the 2016 Killington Cup. ©Mark D Phillips

Gate BendingViktoria Rebensburg of Germany powers her way to the first place position after the first run in the 2017 Giant Slalom. ©Mark D Phillips

The First Victory at KillingtonTessa Worley of France celebrates on the podium after winning the inaugural Killington Cup GS in 2016. ©Mark D Phillips

We had momentary trepidation when the temperatures hit the 60s and 70s in early November, then cold weather and snow arrived just in time last week for the resort to receive approval from the International Ski Federation snow inspectors on November 16th. You can take a look at the Superstar course on the live webcam to see the progress.

“I can confidently say that the entire Killington community is excited, and maybe a little relieved, to hear the news of FIS approval for race course snow preparation, giving the green light to bring world-class elite ski racing to the East Coast in just over a week. After such a warm fall, and with several races canceled elsewhere in the world, receiving the FIS approval is a testament to Killington’s powerful snowmaking system and expert team,” World Cup local organizing chairman Herwig Demschar said in a statement.

Here’s to a great race.