1 month ago
Maccabiah returns to Israel
3 months ago
Skywalk at Niagara, 20th Anniversary
4 months ago
James Nachtwey Memoria
2 years ago
Oil, Tar and more comes to the Surface
2 years ago
Photoville brings a bit of normalcy to Brooklyn 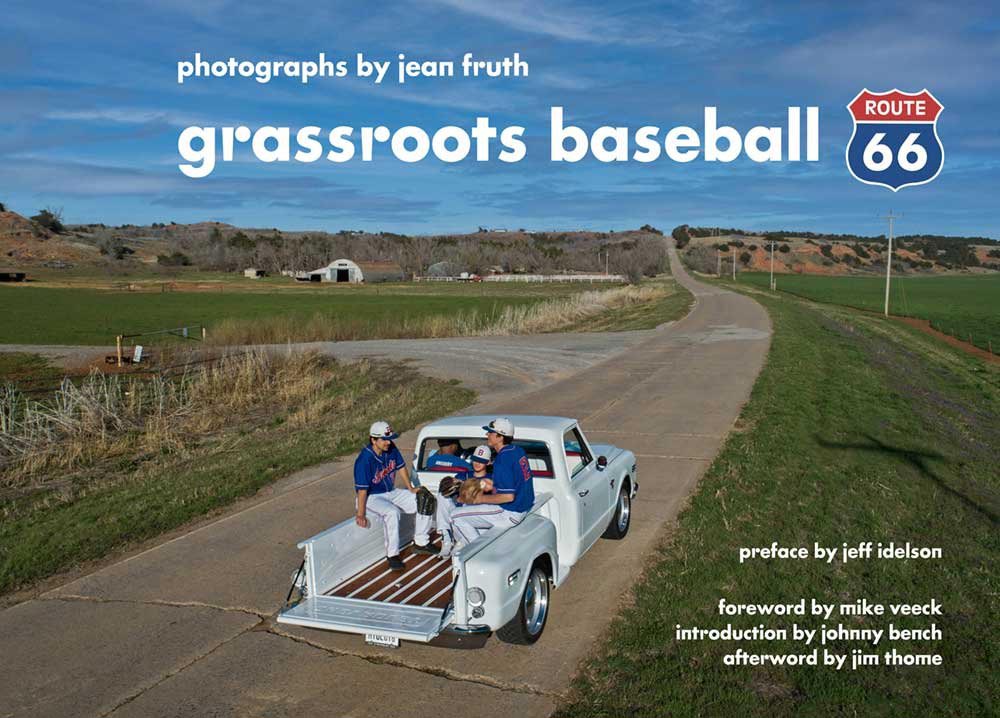 Route 66. It is an American icon. Baseball flourishes along its length.

When Jean Fruth and Jeff Idelson launched GRASSROOTS BASEBALL, they began their mission to celebrate and promote the amateur game by spending three years traveling the majestic highway from Chicago to Santa Monica, by the small towns that brought forth players like Mickey Mantle and Johnny Bench.

Baseball is more of a lifestyle to the essay writers in Grassroots Baseball: Route 66, Jean Fruth’s second book. More of their words are about life lessons and family than baseball. Jean Fruth has a special insight into the game and a knack for bringing those same values into her images. One of my favorite images shows Hector Roa of the Washington Wild Things running the bases celebrating after hitting a grand slam reaching out with his arms into a sign positioned perfectly behind him that states “Luck is Everywhere.”

The journey and the book that was produced is a celebration of small town life and the dreams of the thousands of kids who play for the sheer joy of the game. Mike Veeck, President of the Goldklang Baseball Group, which owns the Charleston RiverDogs, Fort Myers Miracle, St. Paul Saints, Hudson Valley Renegades and others, spelled it out in his essay for the book:

“Unlike the Hall of Famers and other baseball greats who share their stories here, most of us who picked up a bat or glove were destined to fall short, some shorter than others. But what glorious failures we were! We learned about life.”

Jim Thome describes Peoria, Illinois, where Route 66 begins its ribbon into the heartland, as “900 miles from Cooperstown but only 58 miles west of the Route 66 Hall of Fame in Pontiac.” When he talks to kids, he reflects on what he learned over the years and it’s not baseball fundamentals but its values. “Dream big, but take it one moment at a time. Don’t sail too high or sink too low. Learn to be good at handling failure.”

For Ryan Howard, driving into St. Louis and seeing the Gateway Arch tells you that the frontier is straight ahead. After his freshman college year at Missouri State, he joined the Central Illinois Collegiate League and really got to see Route 66, getting to meet people in cities you might have driven past on the interstate. He loved the food on the way and Jean brings us back to his life through images of today’s kids following in Ryan’s footsteps. Ted Drewes Frozen Custard in St. Louis not only was there for a young Ryan Howard, but it’s still there for a whole new generation of youth baseball players who want nothing more than one of its famous “Concrete” shakes to celebrate or commiserate that days game.

From t-ball to little league, Legion to Vintage Clubs, Jeans photographs bring you into the action, beauty and happiness of America’s pastime. In St. Louis, the Brown Stockings Vintage baseball celebrates one of the first baseball clubs in the 1860s, and the images recall that era adding a feeling of total enjoyment by the re-enactors.

Adam LaRoche describes the 13-miles of Route 66 through Kansas as Civil War history and cattle drives, coal mines and farmlands. His life on Route 66 was unique, playing small town ball and summertimes hanging out in major league stadiums playing with the kids of Carlton Fisk, Tim Raines, and other teammates and friends of his dad, a major league pitcher and coach. His family built Dave Regan Stadium in his hometown of Fort Scott. Read the story in his essay and I challenge you to keep a dry eye.

In Texas, Route 66 is a baseball wonderland. My favorite section includes a hauntingly beautiful sunset over Potter Memorial Stadium where Jim Bouton pitched, and Cal Ripken Jr. along with Tony Gwynn played for the Amarillo Gold Sox. Only in Texas would an eccentric millionaire literally drive Cadillacs into the ground as art leading into Amarillo, giving Jean a stunning image that illustrates a quote by Hall of Famer Ralph Kiner, “Home run hitters drive Cadillacs.” And many of them pass the artwork on Route 66.

Jean’s photography beyond baseball soars along Route 66 in New Mexico. Her “magic hour” photographs of landmarks like the Blue Swallow Motel, bring you back to a simpler time when baseball was the most important thing in your life. She captured the Land of Enchantment in its beauty and its love of baseball. Only New Mexico could provide an image of baseball players walking by a half-inflated airship balloon. Alex Bregman describes his hometown of Albuquerque:

“Everybody knows everybody. Everybody works hard, plays hard, and does things the right way. It’s a small town hiding inside of a big city. In that way, it’s a lot like Route 66.”

Reading Billy Hatcher’s essay of Arizona, I wanted to learn more about this amazing major leaguer who came from Williams, a town located 60-miles from the South Rim of the Grand Canyon on Route 66, known as the Gateway to the Grand Canyon. That town of 3,000 celebrated Williams accomplishments all the way from its little league, high school, into a 12-year career in the majors.

That theme is what underlies every story and photograph in the book. Baseball is a family and the more support the individuals had, the further they went. Not all the t-ball players became major leaguers, but they began a journey that taught teamwork and camaraderie.

Johnny Bench recalls his four-year-old self in Binger, Oklahoma, watching Dizzy Dean on a black-and-white TV in 1954 introduce Mickey Mantle as “the next superstar, the switch-hitting center fielder from Commerce, Oklahoma.” He exclaimed to his father, “You can be from Oklahoma and play in the major leagues?” Route 66, in Bench’s mind, should have signs at either end that say “Baseball Ahead” not Welcome to Oklahoma.

California is the first state in the book featuring all-girl teams with Baseball for All, a nationwide organization with female players and coaches spreading the word that baseball is for all. Jean has captured a unique look at America’s heartland with baseball, and connecting it to the big cities of Chicago and Los Angeles. Route 66 may end at the Santa Monica Pier, but Jean photographed a game on the beach at the water’s edge. Just another example of Grassroots Baseball.

Riding into the sunset on Route 66 in California, the famous highway takes you past Dodgers Stadium. It’s a fitting ending for a baseball story. George Brett calls it his “street of dreams. Imagination was my fuel as I traveled down that road.”

“Looking back on it now, I realize how lucky I was to grow up at a time when work and play were equally important, when sunshine and a baseball or a golf ball were your distractions, and there were no cellphones or computer screens. The difference between now and then is a lot like the difference between hopping onto the interstate and cruising along Route 66. Yeah, the superhighway will get you there faster. But it’s not nearly as much fun.”