How did a Superfund site end up in South Brooklyn?

The Gowanus Canal stood stagnant for more than 30 years after the propellor which sucked fresh water from New York Harbor was broken in a construction accident. The flushing tunnel was sealed in the 1960s.

Originally a series of tidal creeks, the native Americans named it Gowanes Creek in honor of Chief Gowanes of the Canarses tribe, who lived, hunted, and fished along its length. The Dutch purchased the land from the tribe, and soon Gowanus Oysters became the first international export from Brooklyn.

The creek served as an important access point from the harbor and blossomed with industry, with tidal grain mills taking advantage of the six foot tides bringing the brackish water along its two-mile course. By 1837 the first proposals were put forward to increase the navigational qualities of the creek. With the opening of Atlantic Basin in 1847 in Red Hook, the Brooklyn waterfront was booming. That same year, the first plan for a 5,400 foot long, 100 feet wide and 14 feet deep waterway was submitted and the Gowanus Canal was a reality. The construction was completed by 1854 to today’s ending point.

As the neighborhoods boomed through the end of the 19th century, sewers and streets were laid out with the canal serving as the drainage point for the wetlands that were replaced by housing. Sewage flowed into the canal as early as 1858, and by the 1880’s the waterway had gained the moniker “Lavendar Lake” for its odorous qualities. Over 30 businesses handling lumber, coal, firewood, hay, grain, oil, building materials, and chemical fertilizers were using the canal.

In 1889, the Carroll Street Retractable Bridge opened and today is one of only four retractable bridge’s remaining in the world.  Built at a cost of $36,742.58, the beloved bridge supports a 17 foot wide roadway and two 4.5 foot sidewalks that are pulled onto the shore on tracks via a cable and pulley system. Landmarked in 1987, the bridge was built to allow horse and wagons to cross the increasingly busy waterway, and still features a sign stating “Any Person Driving over this Bridge Faster than a Walk will be Subject to a Penalty of Five Dollars For Each Offence.” The Third Street Bridge opened is a double-leaf Scherzer rolling lift bascule, French term for seesaw, that uses a system that works with a counterweight that balances the span through the entire upward lift of the spans.

The Ninth Street Bridge opened in 1903, the Union Street Bridge was completed in 1905 and the Third Street Bridge opened  the same year of 1905. All three are double-leaf Scherzer rolling lift bascule (French term for seesaw) bridges, that uses a system that works with a counterweight that balances the span through the entire upward lift of the spans.  In 1995, the Ninth Street Bridge was replaced with a state-of-the-art, electronically-controlled lifting machinery that raises the roadway vertically between two large towers. The four year project was completed with its opening on September 1, 1999, at a cost of $35,000,000.00, or 99,900% more than the Carroll Street Bridge.

The fifth and final crossing, the Hamilton Avenue Bridge, is a bascule bridge with two parallel leafs, one carrying the northbound roadway and the other carrying the southbound roadway. This fourth drawbridge was completed in August 1942 and now sits completely under the elevated Gowanus Expressway.

The first attempt was made to clean the water of the Gowanus Canal began in 1891, and over the next eight years, the Greene Street storm sewer was completed. The 17-foot rectangular pipe connected the inland end of the canal to the East River in an attempt to flush the canal with a steady supply of fresh water. Its failure in 1902 leads to a complete redesign that includes a new outlet tunnel under Degraw Street leading to Buttermilk Channel. The new tunnel does not provide sufficient flow so a pumping system is developed and put into operation in 1911.

The 1920s and 30s prove to be the peak of operations along the canal. More than 50 businesses line its banks, including the Brooklyn Rapid Transit Corporation (opened in 1902) with its 32 coal-fired boilers. At the height of the boom, almost 25,000 vessels travel the length of the waterway.

The Gowanus Canal in the Green Gallery, Mark D Phillips exhibit of “Lost and Found in Brooklyn” on October 19 to 20, 2019.

From the Great Depression through World War II and on to the 60s, the canal suffered the same slow decline as the rest of the waterfront. Beginning in 1939, Robert Moses oversaw construction of the Gowanus Parkway, an elevated highway placed on top of the pillars of the old 3rd Avenue BMT Elevated Line through the Sunset Park and Gowanus sections of Brooklyn. The Gowanus Parkway project, including the widened Third Avenue for local truck traffic, was completed on October 1, 1941. With the expressway replacing the use of barges with truck distribution, the Army Corps of Engineers in 1955 stopped the regular dredging of the Canal. In 1961, the flushing tunnel and its pumping system stopped working, and would not work for the next 37 years. By the late 1970s, it was estimated that half the property along the canal was abandoned and unused.

The next attempt to bring fresh water back to the canal occurred in 1999 when the pumping system was finally replaced to allow a flush of between 200 and 300 million gallons of oxygenated water through the Canal each day. Though the water quality improved, the underlying sediment within the canal contains toxins that still need to be removed or dealt with in another way.

In 2006, the Gowanus Canal Historic District was found eligible for the National and State Registers of Historic Places by the New York State Historic Preservation Office (SHPO). The district’s potential archaeological locations include the sites of three tide mill complexes, at least four shipwrecks, two corridors of battle action from the Battle of Brooklyn during the Revolutionary War and two potential sites of soldier burials.

In April 2009, the Gowanus Canal was proposed for inclusion on the National Priorities List (NPL) pursuant to the Superfund law at the request of NYSDEC. The Environmental Protection Agency designated the Gowanus Canal in Brooklyn a Superfund site on March 2, 2010. The agency estimates that the project will last 10 to 12 years and cost $300 million to $500 million.

The Gowanus Dredgers Canoe Club today brings paddlers to the waterway and both businesses and new residents are returning to its shores. Over the next decade, the canal should get better and become one of the jewels of South Brooklyn. It has been a long time coming.

To purchase images of the Gownaus Canal by Mark D Phillips, click here.

TIMES PAST: IS Brandtsen pier collapsed into Gownaus Bay at the end of the Gowanus Canal in Brooklyn, NY. American Export-Isbrandtsen Lines, New York, was the leading US-flag shipping company between the U.S. east coast and the Mediterranean from 1919 to 1977. ©Mark D Phillips

1989_GowanusCanal_CRmarkDphillipsClouds reflect in the water of the Gowanus Canal looking north with the Twin Towers peeking above the shoreline in 1989. The wall reflected in the water has no graffiti in 1989 and has now joined the past. ©Mark D Phillips 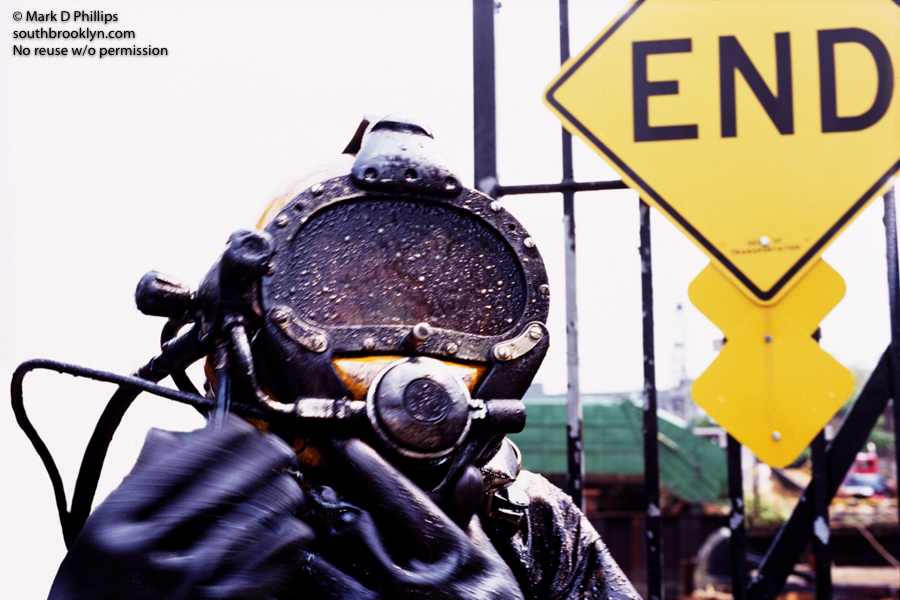 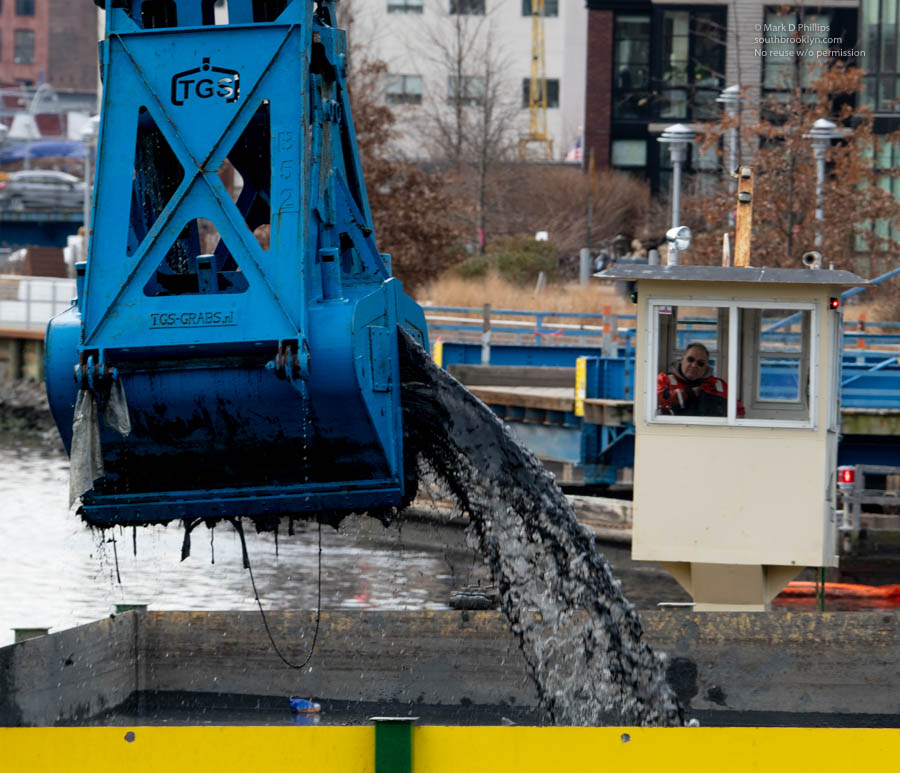 Gowanus Canal DredgingEPA Superfund dredging of the Gowanus Canal on December 30, 2020, during the COVID-19 pandemic, by the Carroll Street Bridge. The current cost of the overall cleanup plan is estimated to be over $1.5 billion, and the entire project won’t be completed until mid-2023. 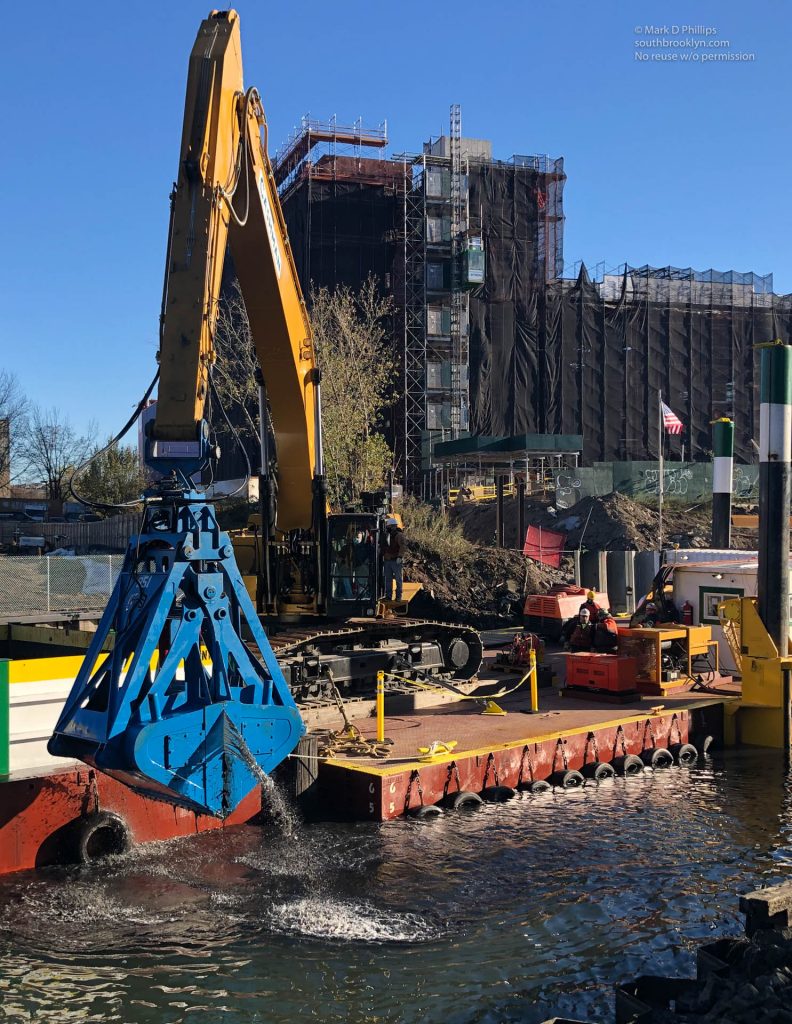 Gowanus Canal DredgingEPA begins dredging the Gowanus Canal in November 2020 by the Carroll Street Bridge. The current cost of the overall cleanup plan is estimated to be over $1.5 billion, and the entire project won’t be completed until mid-2023. ©Mark D Phillips

Gowanus Canal DredgingEPA dredging the Gowanus Canal on December 20, 2020, during the COVID-19 pandemic, by the Carroll Street Bridge. In 1889, the Carroll Street Retractable Bridge opened and today is one of only four retractable bridge’s remaining in the world. Built at a cost of $36,742.58, the beloved bridge supports a 17 foot wide roadway and two 4.5 foot sidewalks that are pulled onto the shore on tracks via a cable and pulley system. Landmarked in 1987, the bridge was built to allow horse and wagons to cross the increasingly busy waterway, and still features a sign stating “Any Person Driving over this Bridge Faster than a Walk will be Subject to a Penalty of Five Dollars For Each Offence.” ©Mark D Phillips

ABRIDGETENDER'S LIFE: Leonard Thomas, the Chicken Man of the Gowanus Canal in Brooklyn, NY, operates the Third Street bridge with the roadway in the open position. ©Mark D Phillips 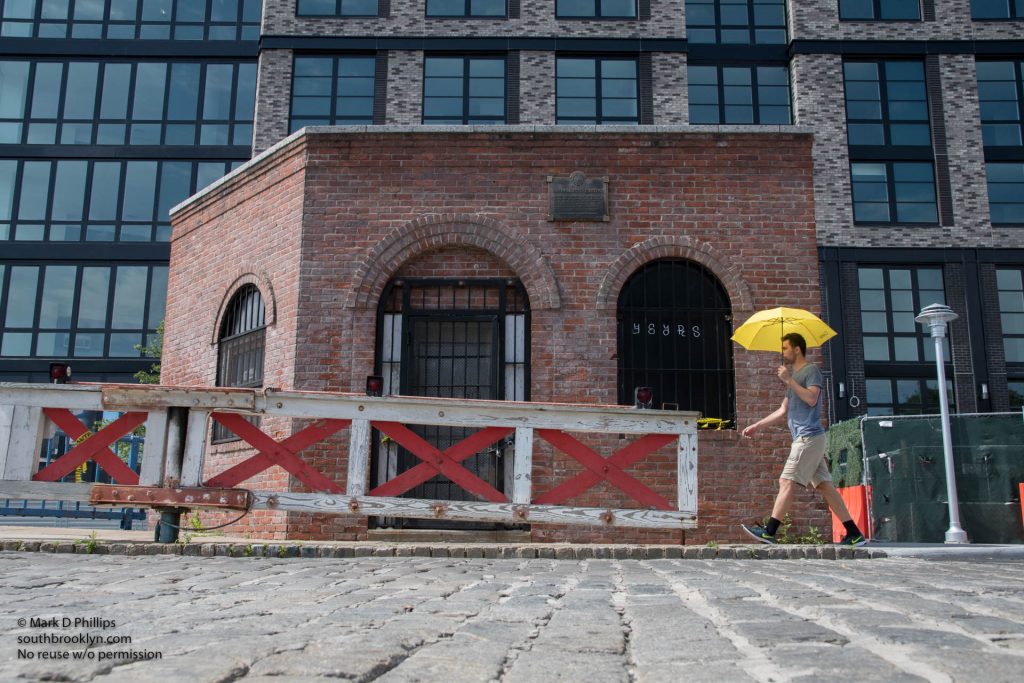 CarrollBridgetender_GowanusCanal_CRmarkDphillipsA yuppie walks by the bridge tender's building for the Carroll Street bridge on the Gowanus Canal in Brooklyn, NY, with a new condo building in the background. The bridge is one of the last retractible bridges in the US to allow boat traffic up the Superfund waterway. 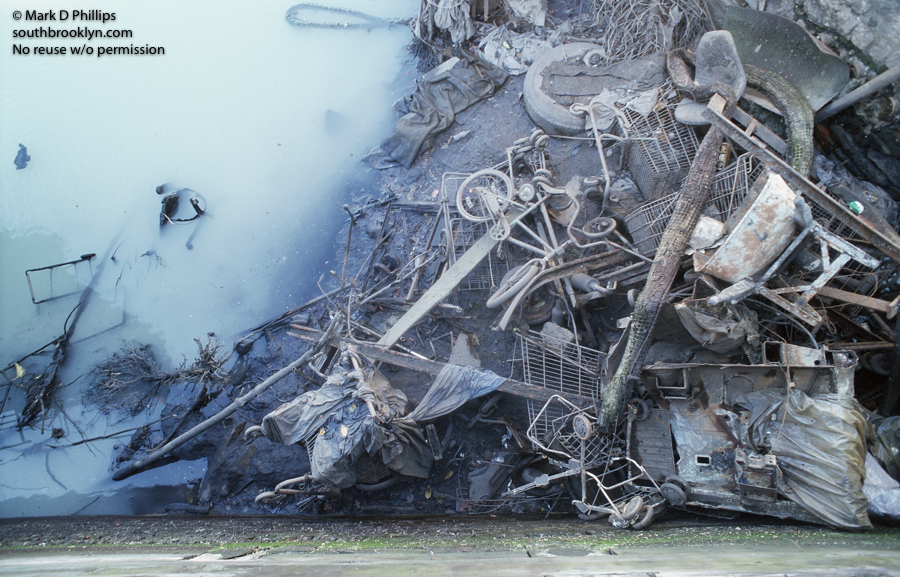 SCRAP METAL ARMAGEDDON: A crane lifts scrap at Benson Scrap Metal from piles to load a barge on the Gowanus Canal at Sunset. ©Mark D Phillips

GOWANUS SWIRLS: Oil patterns move like a live organism in the tidal movements of the Gowanus Canal in Brooklyn, NY. ©Mark D Phillips 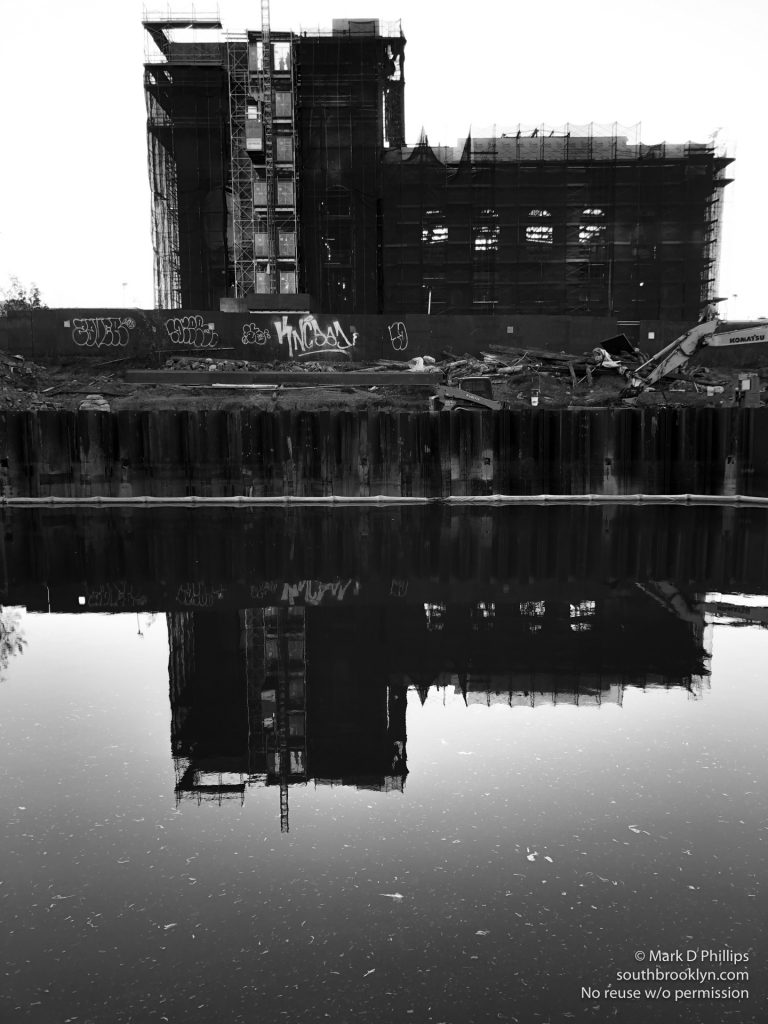 Powerhouse WorkshopThe former Central Power Station of the Brooklyn Rapid Transit Company building, commonly known as the Batcave. A brownfield site, it was a heavy polluter of the waterway. It has been cleaned and will soon be home to Powerhouse Workshop, housing space and equipment for woodworking, metalworking, ceramics, printmaking, and fiber arts, as well as exhibition space. 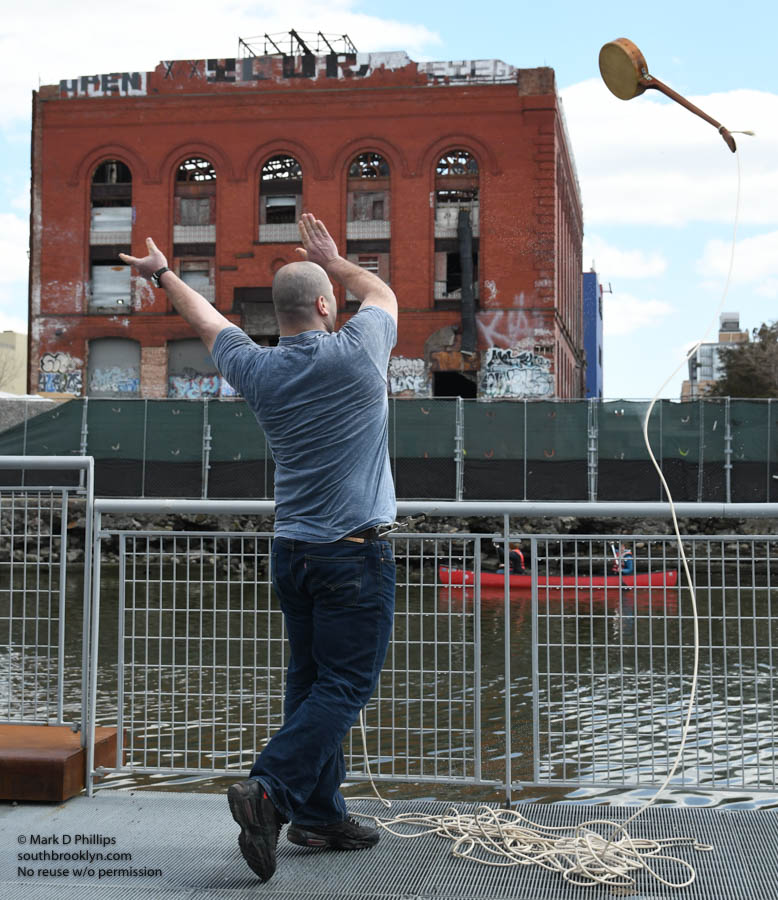 A TOXIC TOSS: Jarrad Morris competes in the Banjo Toss into the Gowanus Canal, part of the Brooklyn Folk Festival on April 8, 2018. ©Mark D Phillips 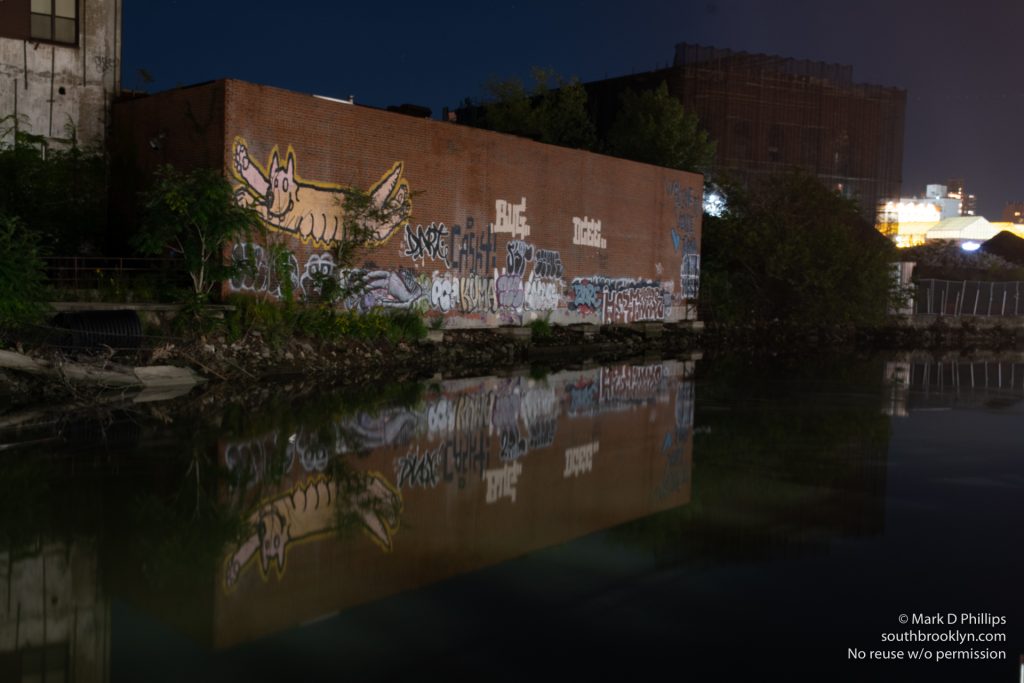 Welcome to VeniceThe former home of Alex Figliolia Water & Sewer, the 65,000-square-foot industrial building disappeared without a trace. Not just gone but obliterated like it had never been there. ©Mark D Phillips 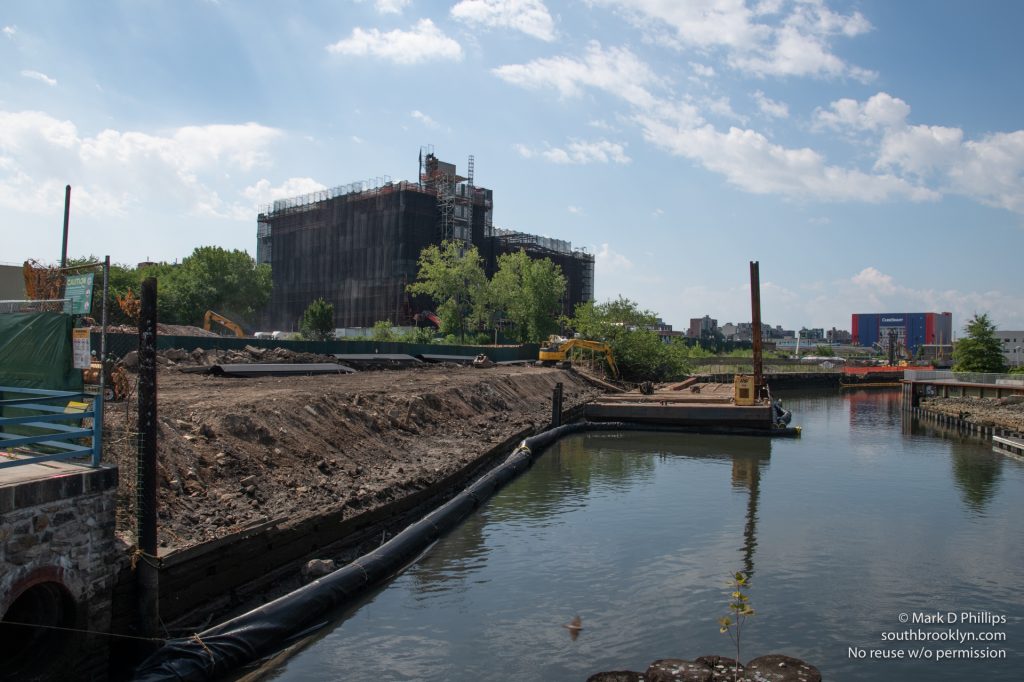 Gowanus Canal changesDuring the COVID-19 pandemic, one of the most memorable buildings along the Gowanus Canal has vanished. The Alex Figliola building was torn down destroying a graffiti canvas that covered the canal-side wall of their warehouse. ©Mark D Phillips