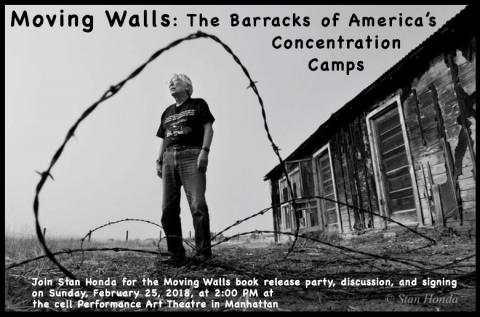 Sharon Yamato, author of Moving Walls: The Barracks of America’s Concentration Camps, states right at the start in her acknowledgments, “This story could not have been told without the deeply moving photographs of Stan Honda.”

I have known Stan a long time and know his passion for this story.

On February 19, 1942, U.S. President Franklin Roosevelt signed Executive Order 9066 forcibly moving over 120,000 people of Japanese descent from the west coast, first to assembly centers (many of them horse stalls at tracks, the only places large enough to hold the large number of people), then once more by train to more permanent “relocation centers,” in reality prison or concentration camps. Stan’s parents were two of those relocated, sent to the Poston, Arizona, camp. With the release of Moving Walls, we all have a chance to relive an American tragedy through the contemporary images by Stan, historical images, and first person recollections of those who were there.

“I’ve always been interested in the Japanese American incarceration since my parents often talked about it,” said Stan. “I’ve done some personal photo projects over the years about visiting the sites and pilgrimages by survivors to the camps. Moving Walls is the biggest of these projects. The barracks are the one artifact that is common among all the camp survivors. Everyone lived in a barrack and has stories about them. My parents and their siblings always talked about how harsh life was in the wood buildings that had little insulation. It seemed to be good to be able to document and preserve this history.”

Yamato is a third-generation Japanese American, also known as a sansei, who was inspired to write about the importance of preserving the barracks after watching how powerfully the buildings impacted camp survivors. It was also personal. She wanted answers to her own questions about the effects of the incarceration on her own parents, grandmother, and eight siblings. Her parents never spoke of it to her.

In 1994, Stan saw a small item in the newsletter of the Japanese American National Museum (JANM) in Los Angeles saying the organization was looking for volunteers to help disassemble two barracks from the Heart Mountain camp in order to ship them back to LA for display and preservation.

“My immediate thought was that this was a process that had to be documented,” said Stan. “The camps and barracks are a part of American history and my family’s history. As a photographer, I realized I had the ability to do this and preserve some of our history.”

Stan and his wife, Ann Levin, flew to Wyoming and met the crew of volunteers from Los Angeles in Powell, WY, near where the camp was. They found two barracks that farmers used as storage buildings and appeared for the most part as they did in the 1940s. Stan photographed the dismantling process for a few days (with film!) and met everyone including Sharon Yamato.

“A month after Wyoming, I flew to San Diego to meet my dad and we drove up to LA to watch the volunteers reassemble a barrack in the parking lot of the JANM as part of an exhibit on the barracks,” said Stan. “He really was interested in seeing the barrack and the construction process and meeting the volunteers. As a camp survivor, he was a minor celebrity at the site.”

While photographing the reconstruction, Sharon told him she was going to write a book on the preservation. The two collaborated in 1995 on the first version of this book producing Moving Walls: Preserving the Barracks of America’s Concentration Camps.

In 2014, Yamato applied and received a National Park Service grant to do an expanded version of the original book. She found out about barracks that had been turned into homes and managed to find about 10 of the original homesteaders who were still alive. In May and August 2015, they traveled to Wyoming for extended periods to interview and photograph the people, barracks and the land.

Stan Honda’s scene-setting image of Heart Mountain in Wyoming is breathtaking. The “upside-down mountain” is, according to local legend, so named because the Crow Indians thought it looked like a buffalo’s heart. The distinctive landmark gave the camp its name.

Estelle Peck Ishigo, who voluntarily spent three years at the Heart Mountain detention camp with her Japanese American husband, captured its majesty with poetry. “Some spoke the name of the Mountain with the same ancient reverence felt for their own mountains in Japan,” she wrote. Her ashes rest atop its peak.

Chris Komai, one of the original volunteers who came together to save the barracks in September 1994, is quoted in the book saying, “his mother told him that leaving for Heart Mountain was the saddest day of her life; for him the day he left the camp was his happiest.”

For all of them, the barracks were an indisputable and graphic reminder of gross injustice. Preserving them was a way to see that forced detention based purely on race would never happen again.

Many of the volunteers quoted in the book had little firsthand knowledge of the camps from their parents. Steve Yamato was hoping to find a connection to his parents. They spent their first three years of married life in one of the barracks. The barracks project gave participants the opportunity to step into the place where their parents had been.

“The barracks are the one artifact that is common among all the camp survivors,” says Stan. “Everyone lived in a barrack and has stories about them. My parents and their siblings always talked about how harsh life was in the wood buildings that had little insulation.”

The Interpretive Center by the Heart Mountain Wyoming Foundation officially opened in August 2011 with Tom Brokaw and former Senator Daniel Inouye providing speeches. The barracks had become the last phase of homesteading in Wyoming after the war. When the camps were closed, the barracks were repurposed and found their way throughout the Wyoming landscape. Moving Walls also tells the story of the homesteaders, many of whom were returning WWII veterans and their families, who purchased the barracks for a dollar a piece from the government in the post-war lottery. Both groups have found a common story in their shared memories of life inside the flimsy shacks.

Stan Honda documented many of these unique usages such as a lamb shed, a barn, apartments, and a Mormon church.

“My favorite memory is realizing there are barracks still existing within the walls of these Wyoming homes and the history of the barracks and the camps can continue in that way,” Stan continued.

The wartime memories of what was done to Americans of Japanese descent became rationalized as “protection from harm” rather than the internment camps they actually were. This viewpoint has long been debunked by historians. Yet a descendant of the homesteaders, Ruth Blackburn Pfaff, is quoted in a telling passage saying, “I mean was it right or wrong? Nobody has that answer. It wasn’t necessarily right or wrong. It’s just an incident that happened.”

The barracks symbolize a thought process that still permeates society. We must make sure that no other group of Americans will ever be treated this way again.

Join Stan Honda for the Moving Walls book release party, discussion, and signing on Sunday, February 25, 2018, at 2:00 PM at the cell Performance Art Theatre located at 338 West 23rd Street in Manhattan. The event is part of the New York Day of Remembrance marking the 76th anniversary of the signing of Executive Order 9066, as well as commemorating the 30th anniversary of the signing of the Civil Liberties Act of 1988.